National award for The School of Artisan Food 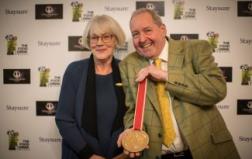 It’s celebrations all round at The School of Artisan Food today, after the team won the title of Best British Cookery School in the first ever national Food and Drink Awards, which aired on ITV last night (9 February).

Alison Swan Parente, founder of the School based in the Welbeck estate, collected the award during the glittering ceremony that celebrated the very best of British gastronomy.

Actor and national treasure, Stephen Fry, hosted the awards ceremony at the Merchant Taylors’ Hall in London that showcased the high-achievers of the food and drink industry. The awards, which were organised in association with Staysure and thefoodawards.com, were curated by a committee with a passion for fantastic British food. The School of Artisan Food was recognised for its contribution to teaching all aspects of artisan food production.

“We are thrilled to receive this prestigious award,” said Alison Swan Parente, MBE founder of The School of Artisan Food. “It is a real honour and we are proud to have been recognised for our dedication to the sharing an understanding and appreciation of quality, artisan food.”

“As a not-for profit organisation whose strong values and ethics around sustainability, bio-diversity and simple, healthy food inform everything we do, we pride ourselves on our many training courses for people of all skill levels. We particularly welcome the award at a time when the School is celebrating its 10th anniversary.”

“We felt thrilled to share a stage with such other winners as icon of the new British Food scene Fergus Henderson of St John, and up-and-coming chef James Ferguson.”

National award for The School of Artisan Food