A taste of the seasons: why Welbeck is the bee's knees 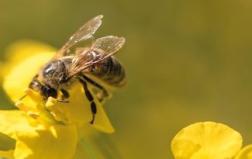 When arable farmer David Chase first began keeping bees as a hobby, little did he imagine that within a few years it would turn into a thriving business.

It quickly went from just one hive on his farm in Weston to 15 hives within months. He now has 60 hives of bees that he transports around the local area so they can forage the wild flora and fauna.

During the summer he keeps half of the hives on the Welbeck estate so the bees can feed on the ancient meadows and woodlands.

“It was 15 years ago that I first discovered beekeeping,” explained David. “I had been talking to a beekeeper and I decided to give it a go as a hobby. What started as a bit of an interest grew very, very quickly into something much bigger. In my first year I went from having one colony of bees to 15 colonies. It was quite a learning curve! Now I’ve 60 hives.”

He took on 12 of those colonies from the retiring beekeeper on the 15,000-acre estate at Welbeck in 2006. He began placing his bee colonies in the same spots on the estate too, following in a long tradition.

Each colony, containing between 50,000 and 70,000 bees, feasts on the seasonal crops and flowers including the fragrant lime trees and sweet chestnuts on the estate, which gives the honey its distinct rich flavour.

The bees feast on the pollen to produce the nectar sugar. This is then turned into the Ladies Apiaries honey that is sold at independent outlets including the estate’s own Welbeck Farm Shop.

The five flavours of honey produced by Ladies Apiaries are all supplied as raw honey and not heat treated. It means that they contain all the natural yeasts, pollens and vitamins.

The flavours include honey produced from:

At the end of the summer the hives are moved into the Peak District where the bees forage the heather moorlands and produce heather honey; the last crop of the season. After the final crop the bees are brought back to Weston to overwinter. When spring comes round again, the beekeeping cycle starts all over again.

A taste of the seasons: why Welbeck is the bee's knees

The Harley Gallery to re-open on 1 August