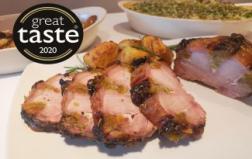 Welbeck Farm Shop has received a coveted 3-star accolade for its signature Welbeck Lightly Cured Pork with Apricot and Pistachio in the prestigious Guild of Fine Food Great Taste Awards.

The shop, which is based within the Welbeck estate, received the highest honour when the Welbeck dish was judged a 3-star winner. Only 1.6% of the 12,777 entries judged nationally receive such an award, putting Welbeck Farm Shop amongst the elite.

Welbeck Salt Beef and Welbeck Back Bacon also gained 1-star awards, which are only given to food products that are deemed by judges as 'simply delicious'.

The news followed a long judging process carried out nationally by 500 judges, who included chefs, buyers, fine food retailers, restaurateurs, food critics and writers. Organised by the Guild of Fine Food, the awards are described as the ‘Oscars’ of the food and drink world.

Oliver Stubbins, General Manager at Welbeck Farm Shop, said: “We’re thrilled to have received this award. It’s a nationally recognised accolade and to have been singled out is a real honour.”

Author and presenter joins The School of Artisan Food