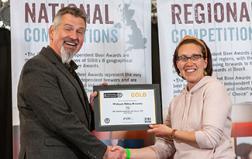 Welbeck Abbey Brewery is delighted to announce that the revamp of its core range of beers has been a great success.

The good news began shortly after the launch event, with wins for all three new beers at the Farm Shop & Deli Show, held from 25-27th April at the NEC in Birmingham.

Awards have continued to roll in, with Red Feather taking Gold and Skylight taking Bronze in their respective categories at Chesterfield’s local Barrow Hill Roundhouse Rail Ale Festival. The festival was held from 19th-21st May, with over 350 beers on offer for revellers to sample. The competition entries were blind-tasted by a panel of judges.

The Brewery’s latest win is a Gold Award in the pale cask category at the SIBA Midlands Independent Beer Awards. The SIBA Independent Beer Awards judge a vast range of beers in separate cask and keg competitions across several styles. As the awards are judged chiefly by brewers, industry experts and beer journalists, they are seen as the prestigious ‘Brewers’ choice Awards’ by the industry. Roy Allkin, SIBA Chairman, said, “The winners of the SIBA competition are officially the best independent craft beers in the region, something brewers should be extremely proud of.”

“Reinventing the core range of beers was a bold move that I was still apprehensive about; however, we are all breathing a sigh of relief with the awards rolling in. I knew the brewers had come up with cracking new beers, and I’m delighted that industry experts across the country have recognised their efforts.”

Claire and her team are now concentrating on the rest of the year ahead, with more awards hopefully in the pipeline, as all four beers have been entered into the popular Great Taste Awards, which will be announced in August.

If you’d like to try these award-winning beers for yourself, you can purchase them online for delivery within the local area or visit one of the many pubs and beer shops that stock Welbeck Abbey Brewery.